The race is over and by all standards it was a success. I wanted to write down what went into it (so you can host your own) and how I think we can make it better the next time around. But first, a quick overview of what happened:

On September 7th at 6am, 21 participants and a handful of spectators showed up at Confluence Park to run the world’s first completely zero waste 5k. 32 registrants each paid $20 to participate in the inaugural event (that’s $640). A few of those registrants were really donors who emailed me after they registered and said they couldn’t make it, but they wanted to support. Of the 21 who ran, over 25% of them drove down from Boulder to participate - which, if you don’t live around here, is a 30ish minute drive. 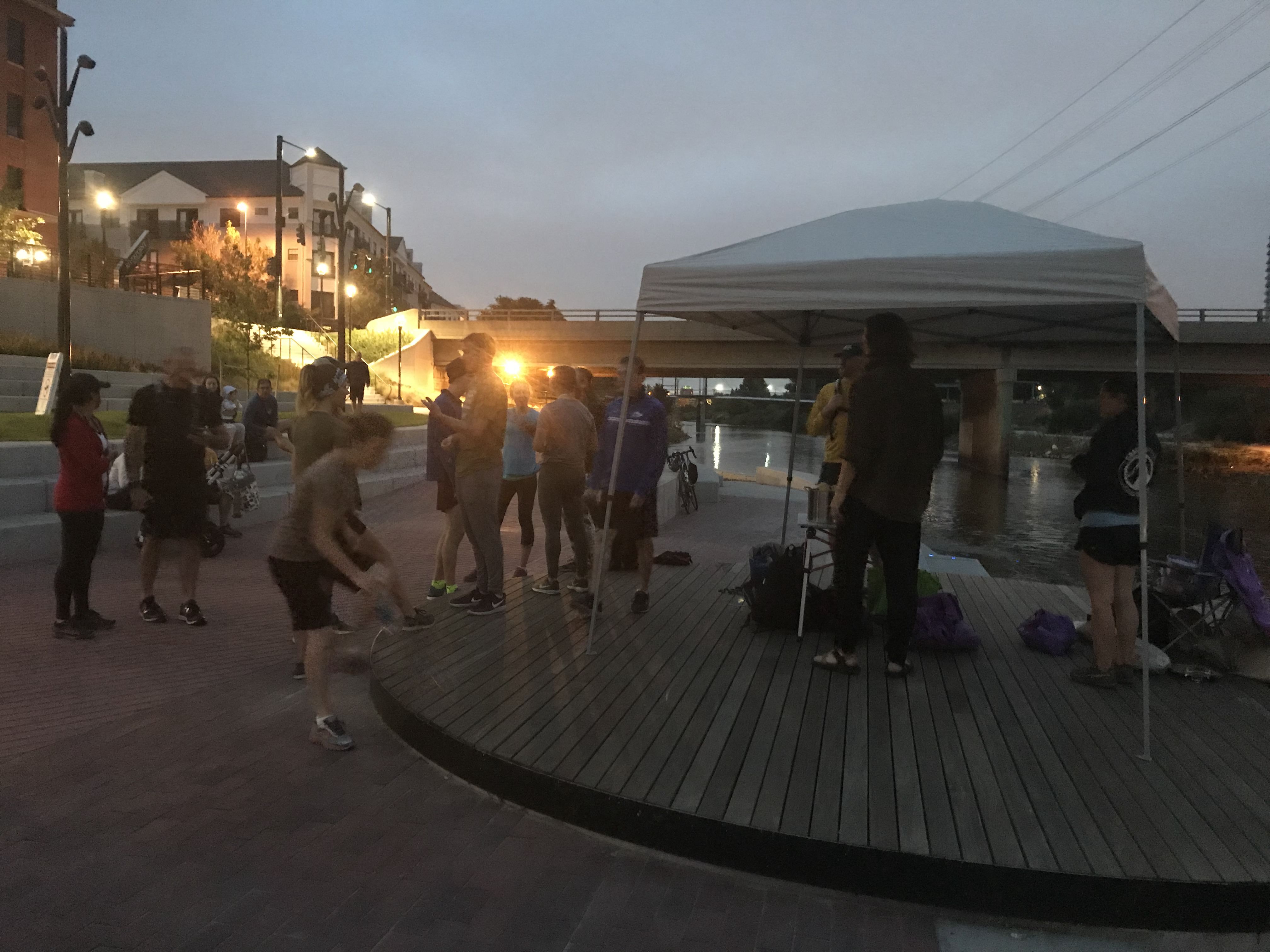 “Getting ready to run.”

My goal with the NoWasteRace was to prove that zero waste events are 1) possible and 2) a viable business venture. I know zero waste is more expensive than wasting, and it takes a lot of planning and focus, which is why my event was small. Those problems, while challenging, are solvable, once it is clear that demand is there (read: the money is there). The NoWasteRace showed that people are not only super excited about zero waste events, but that they are willing to pull their own weight and bring bottles/containers when asked, as long as that is a facilitated part of the event and not something they are swimming upstream to accomplish.

Things that were of utmost importance in planning this race:

Things I decided to pass on:

Bathrooms are hard. Easily the biggest blocker in scaling something like this up for the future. My current solution for bathrooms is to have the event at a place, like a campus which either has a field house or bathrooms inside and then pay to have them cleaned afterward. Another option would be to hold the race in a park with bathrooms. With pre-planning and partnership this is manageable.

This race straddled a fine line between an informal meet up and an event with paid registrants. Someone even wrote into the contact form asking why this event wasn’t a free meet up to help zero waste folks meet each other. I explained to them that my goal was to show other race organizers that there are people willing to pay for this sort of thing. To my surprise, they were stoked on that answer.

For zero waste to catch on it needs to make economic sense and also be easy for consumers to partake in and establishments to practice. Consumption is a very passive task for the average individual. You are handed napkins, straws, plastic utensils, double cupped cups of ice cream, etc. In order to not consume you have to swim upstream and go out of your way. Most people are never going to confront someone on these consumption practices, it’s just too scary. Confrontation is hard, you don’t go out to dinner looking for a fight. NoWasteEvents offer people ways to participate in their lives and take control of their consumption habits, by giving them a place where they don’t have to fight tooth and nail to not be given garbage.

100% zero waste events at scale are expensive and really damn hard. I couldn’t figure out how to start making a dent in the waste these larger events produce, until a few friends of mine helped me reframe the problem. NoWaste is daunting when looked at as an event goal, but not when framed as a participant’s goal. Like peanut allergies and gluten free diets, NoWaste can be an accommodation made for the intense minority who want it. This gives us a great place to start from. It allows us to be hands on with the people that pay for this experience, and gather feedback on how to improve the next time around. 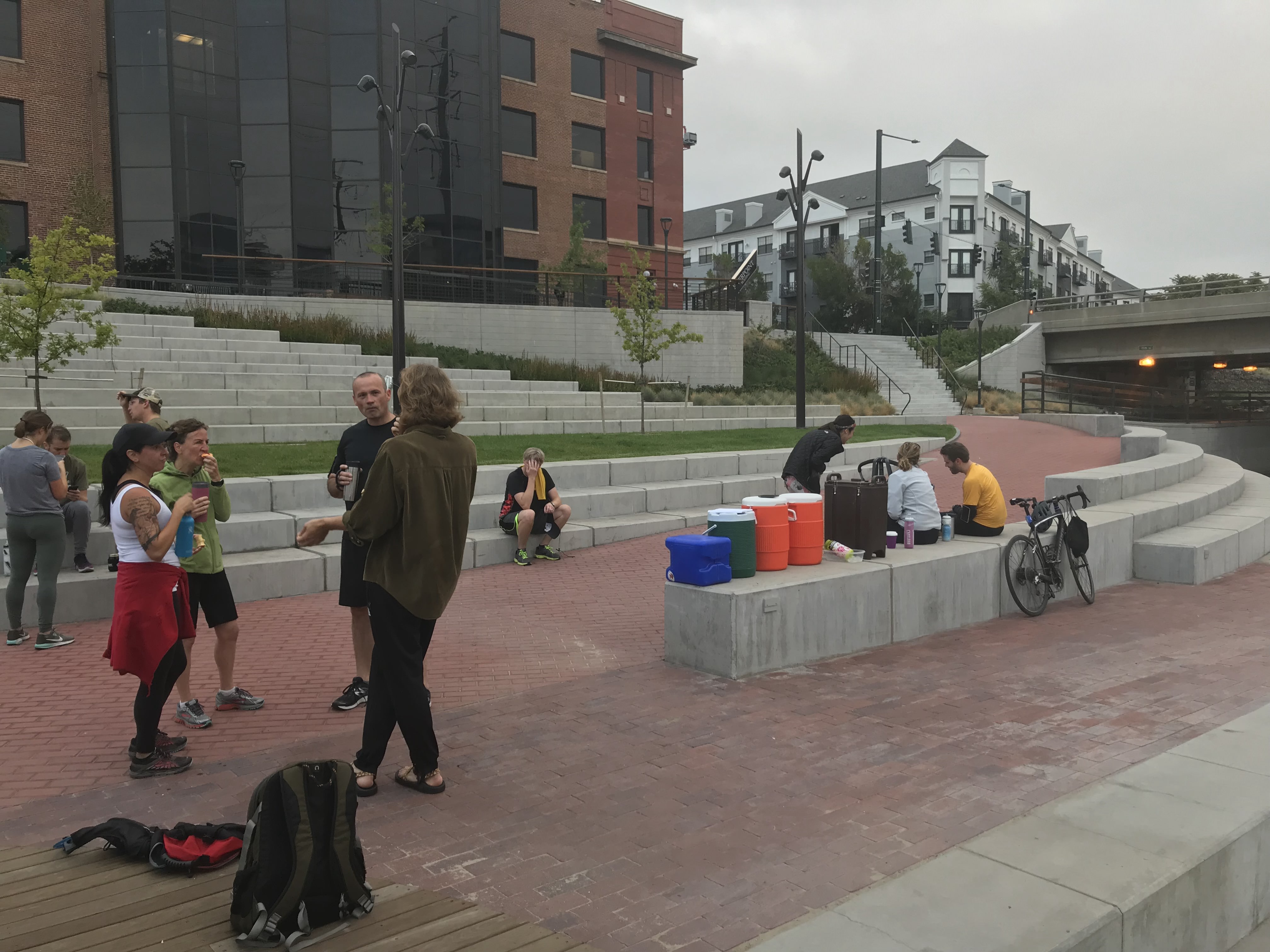 “Chatting about what can be better for next time.”

How I did it so that you can do it (better) too!

This race was small in scale, and really just a proof of concept; as a result we cut some corners that larger events would have had to figure out, mainly bathrooms (as mentioned before). The main problems we decided to tackle and solve were food, beverages, promotion, and timing.

Let’s start with the food. After the race we served:

The limitations in what we could serve for food came down to how they were packaged. The peaches and apples I got at Whole Foods because they sell locally sourced produce during the right seasons. The peaches were not stickered, like most other fruits, so they passed. The apples were supposed to be stickered, but with the help of a personable Whole Foods employee, we were able to find a bunch that had not been stickered. Don’t be afraid to ask for help. When I told this guy what I was doing he was so stoked that after he helped me dig for apples, he gave me suggestions on where to get other food for subsequent events. 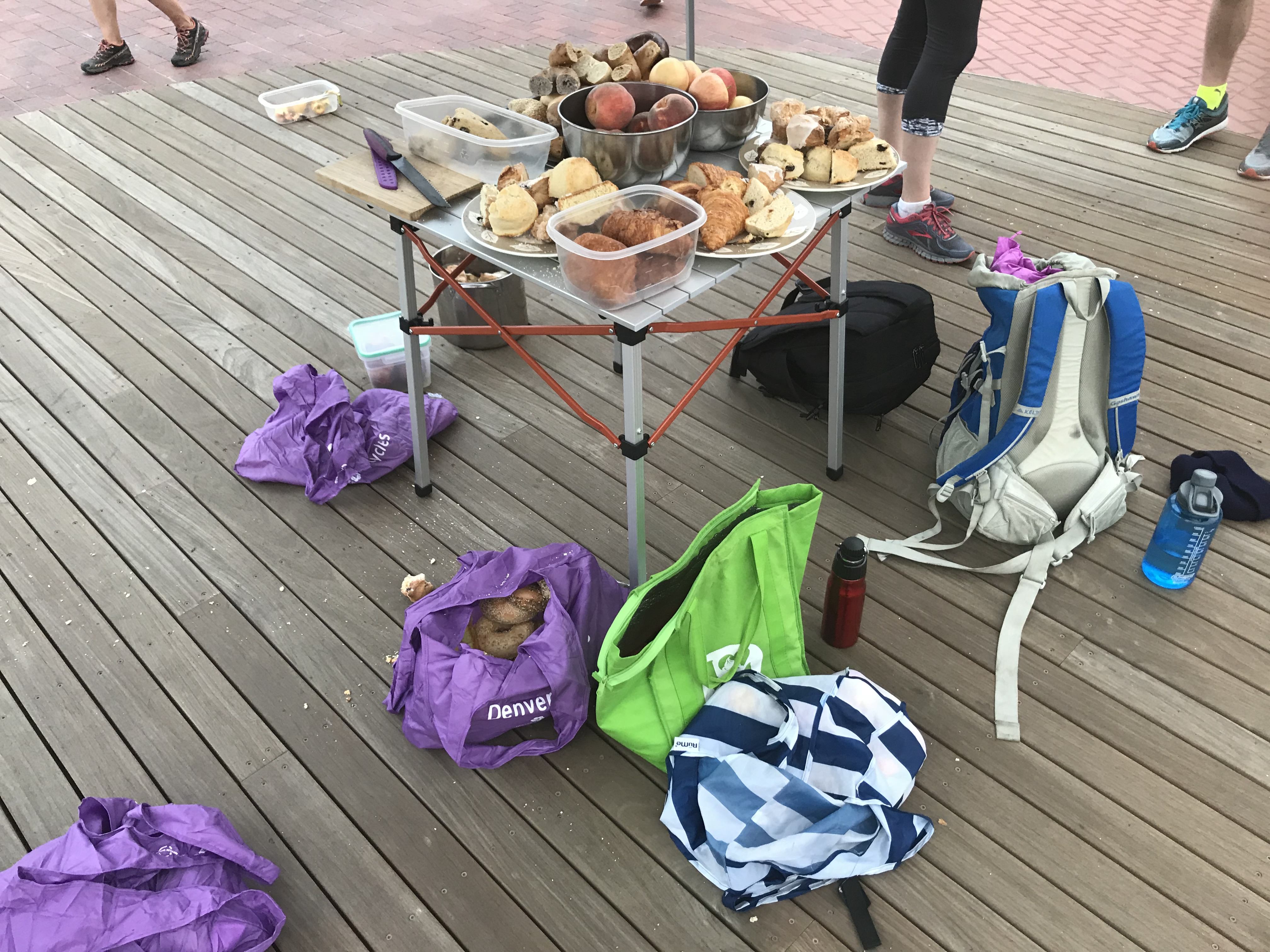 The biggest issues I ran into here were storage and transportation. I bought all of the pastries the day before since the bakeries wouldn’t be open before 6am. This hurdle could easily be avoided by not having your event so early. Luckily I was able to cram the pastries into containers I had in my house. To transport them to the event, I used a pot I normally reserve for boiling turkeys. The bagels weren’t too bad. When I went to get them at the bakery, I brought some large reusable bags with me. Those bags were also good for transporting the fruit.

To serve everything, I brought plates from my house, a baking sheet, and some mixing bowls. As people ran I cut the pastries and bagels into post-race portions and then laid them out.

For beverages we had:

The coffee came from the same store where I bought the bagels. The day before the race I dropped off one of those big coffee containers that you see in hotels and at catered events - that way we could skip the boxes. The water, I put in some of those 5 gallon Gatorade coolers, which I bought on Craigslist.

Promotion wasn’t too hard to keep zero waste, it was all online. Except for one physical ad we had. The supportive folks over at ZERO Market allowed us to put an ad up in their store. To make this ad, I went to ReCreative, a used art supplies store. There I was able to buy one half-used colored pencil, a used roll of tape, a stencil, two sheets of paper, and an old picture frame. I could have printed something off, but this ended up looking a lot better. 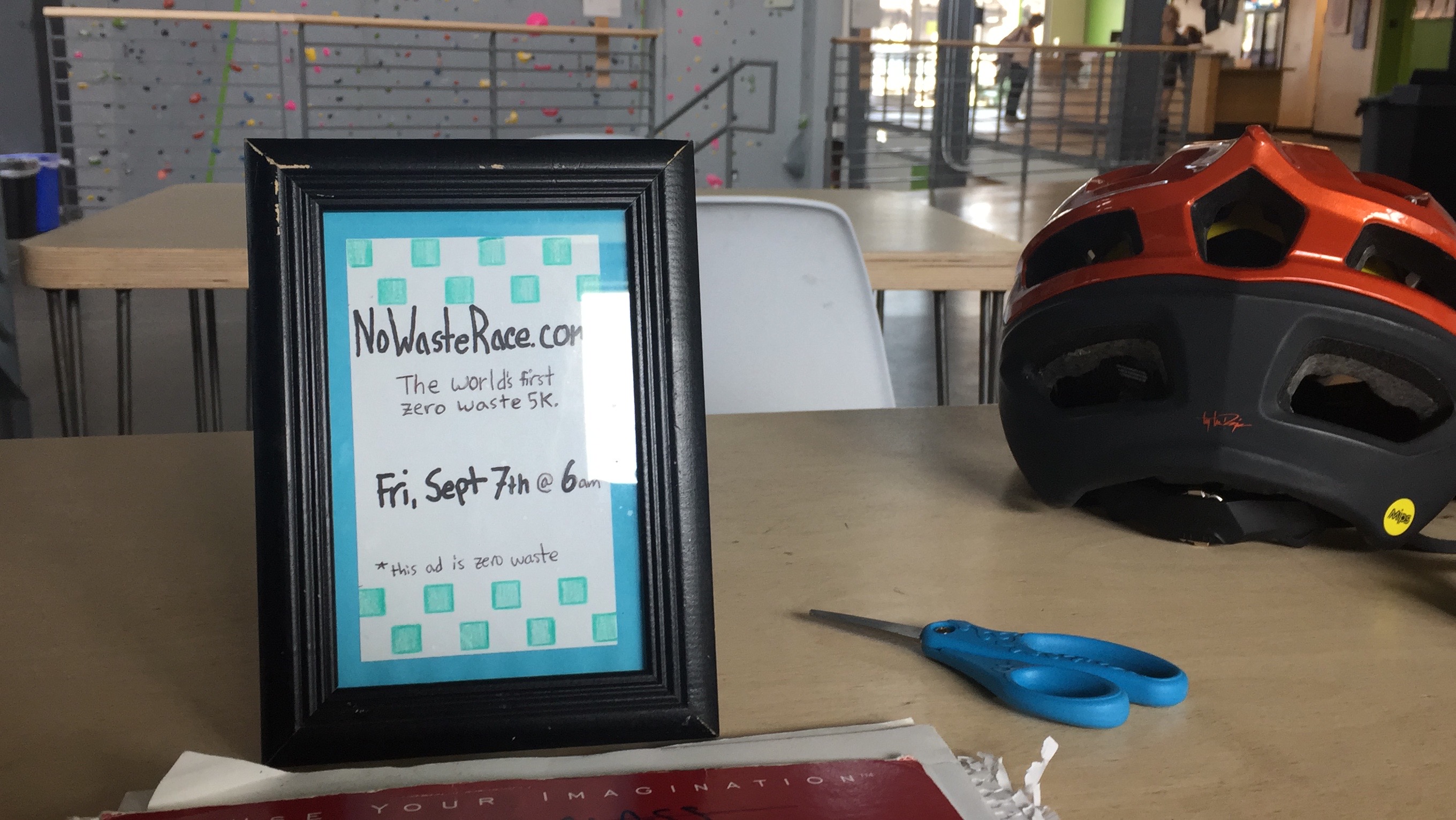 With a small event like this, I just wrote down times as people crossed the finish line. At scale I’d look into having chips that get held to your shoe with your laces. It’d be really great if people could buy their own chips and bring them to events, but handing them out beforehand and collecting them afterward isn’t too hard. 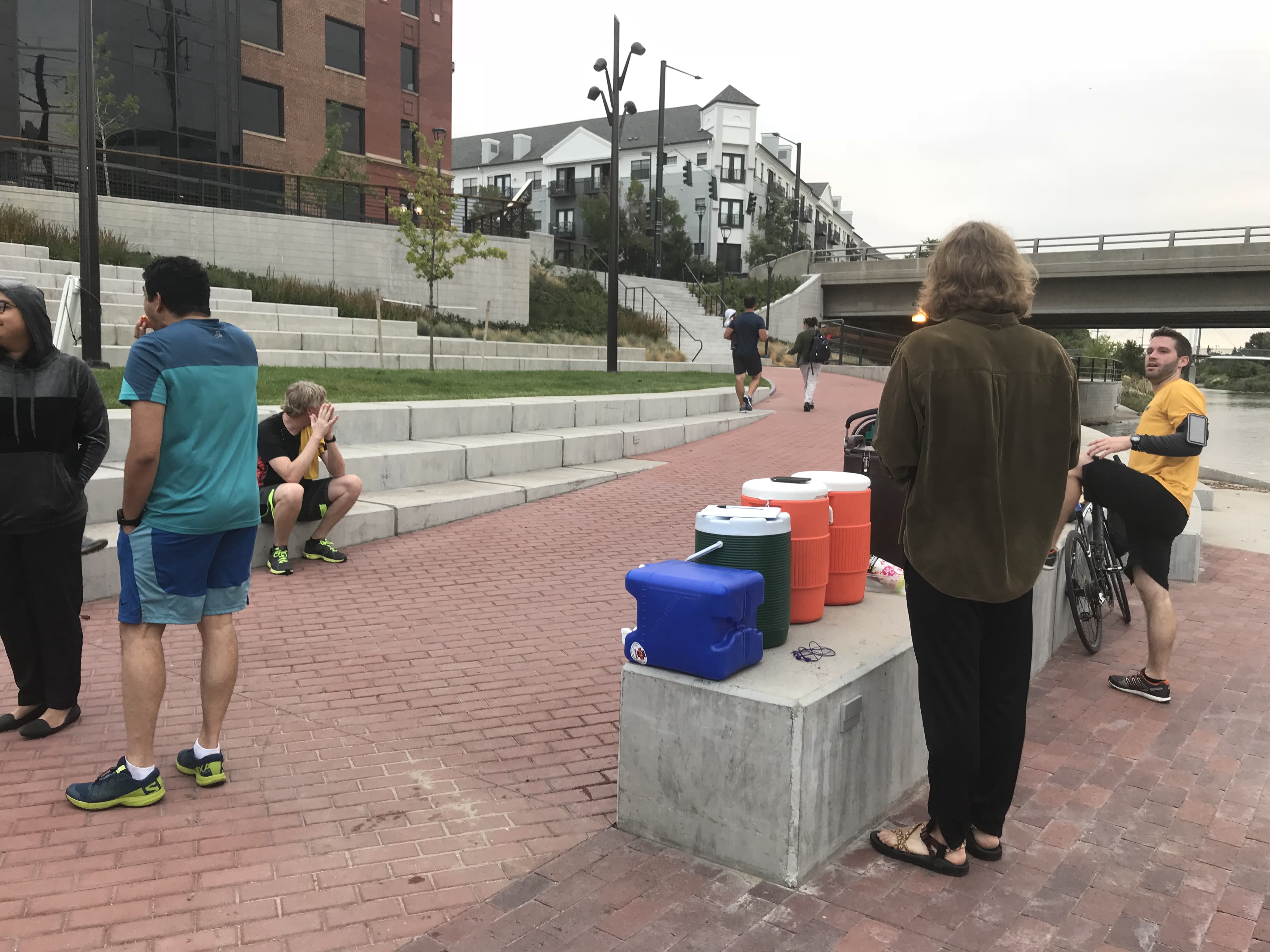 “Our timing system in action.”

Keeping the event small, with a dedicated group of participants, allowed us to be super flexible as problems popped up. We didn’t try to pretend that we were putting on something that we weren’t. Being upfront with our registrants made it easier to ask them how we can be better next time.

The NoWasteRace blew all expectations I had for it. I’ve never launched anything met with more enthusiasm. Plus, people paid real money to get up at an ungodly hour to run before work - which seems like validation for the idea to me.

Building on the success that we all created with this event, I’m reaching out to other race organizers to see if they are interested in having a NoWaste option for their races, and offering to help coordinate and develop them.

I’m also exploring other ideas: the NoWasteTaproom, a popup, completely zero waste bar event. NoWasteWednesday, a day where local shops commit to experimenting with zero waste practices for a day, and encourage patrons to bring their own containers.

If you have any ideas for events you’d like to see, or want help making your next event zero waste, please feel free to reach out to me!

Thank you Frank Leng for documenting the event and sending me these photos!