I went to Penn State because — for the price — it has a good business school and it would leave me the least in debt. The Smeal College of Business cranks out thousands of graduates a year, many of whom go on to work for big corporations like Johnson & Johnson or Dick’s Sporting Goods. A select few students each year get recruited by big Wall Street firms, mainly Goldman Sachs. When I came in as a bright-eyed freshman, that was my dream. I had gotten accepted into the Sapphire Leadership Program, been given the right guidance, and was ready to go to work for Goldman.

The first step in my conquest was to become a more professionally developed individual. Few people straight out of high school know how to conduct themselves in an interview or career fair. I went to mock interviews, resume workshops (well first I had to make a resume), and put myself on the mailing list for so many different clubs. After all, everyone I talked to said that I needed to become a “leader”, and apparently in academia that means someone with more responsibility than a typical club/organization member, so I needed to become a Treasurer, Finance Chair, anything that showed Goldman Sachs that I had been responsible for money.

For the first couple of months I kept this up pretty intensely; unwavering in my goal to make it to Wall Street, make lots of money, and live a life that would eventually drive me to cocaine and, if I was lucky enough to find them, quaaludes.

In my search for the one right way to Wall Street, for the collection of activities that would turn my resume into a golden ticket to the financial mecca of the world, I had come across the Nittany Lion Fund. The Fund, as it’s called, is a student run hedge fund worth over $7 million. It is run solely by students, with oversight from a board of faculty members. That was it; the Fund was my golden ticket. Everyone pretty much got a job on Wall Street when they finished their tenure with the Fund.

Shortly after hearing about the Fund I attended an information session that covered what it takes to get in, the application process, time commitment, etc. The lady running the session asked everyone in attendance to raise their hand if we read either The Wall Street Journal, The Economist, or New York Times on a daily basis. I was one of two or three out of around 35 that did not raise their hand. That was the beginning of the end of my time in Smeal.

This is where I go for my news:

To be in the fund I had to love finance, I mean really LOVE doing financials. Wall Street had to be my Garden of Eden or else I was going to hate myself for the next 4 years. There were rigorous tests I had to pass, presentations I had to make, and worst of all I was not allowed to study abroad. That was the nail in the coffin for me.

After that meeting I tried to convince myself that I could go to Wall Street without the Fund. Being Treasurer of the Crew team was definitely preparing me for a life as an Investment Banker; being a CPR/First-Aid certified leader for the Outing Club showed that I could handle the pressure of life or death responsibility. With this new mindset that anything I did could be made relevant to Investment Banking I began to branch out, do the things that I wanted, and worried less and less about this Yellow Brick road that led to Wall Street.

Now for some backstory really quick. Ever since I was a child I was trying to be entrepreneurial and creative. I would suggest to my grandparents that their closets were messy, and they should hire someone to clean them up. Then I would slyly, or rather bluntly looking back at it now, hint that I was the guy for the job. In high school I started a lawn care company called Edge to Hedge, because I refused to have a minimum wage job with fixed hours. People would hire me to do anything from pulling weeds to removing snow. I was even hired by real estate agents to maintain properties that they were showing. When I was younger I was the kid who took Legos one step too far, and my forts look like they belonged on West Egg. Creating things is a fabric of my being. It always has been, but it was something that I failed to consider in choosing my original career path.

Let’s step back into State College, PA circa 2013 again. As I branched out and explored more clubs I stumbled across Innoblue — Penn State’s entrepreneurship club. This was immediately something I became highly interested in. Innoblue also doubles as Penn State’s hacker community if you will. That’s how I came to find it — I was looking for a club where I could learn to code as a hobby. My first impression of Innoblue was that it was a club for programming gurus. I didn’t think they would want me pestering them with question after question. Sadly, I prevented myself from going to any meetings until around March, and missed out on a whole semester of activities.

I wasn’t planning on ever going, but my neighbor across the hall from me was highly involved with Innoblue and eventually convinced me to go to a meeting. Looking back now, the day that Albert Guo finally made me attend an Innoblue meeting is a day that forever changed my life; for on that day he introduced me to Dan Stepanov. While Albert loves coding, he’s not nearly as in your face about it as Dan. I always told Albert I would learn and when he asked me if I had made any progress I would use the same lame excuses: I’m too busy, exams and stuff. His general reaction was along the line of telling me it was the thought that counts. That was not the response I ever got from Dan.

When Dan asked and I said I had built nothing, he’d get animated about it. He’d say it’s been a whole week, and I should have made progress or his favorite line “ideas are useless if you don’t act on them”. He forced me to sit down, pull out my computer, and download Xcode one night. That was my first exposure to any kind of developing environment. From there I began to watch tutorials and actually write lines of code. My first full program was a Magic 8 Ball. It took me a few hours longer than it should have, but I had done it. It was supposed to be a 20–30 minute break from studying, but it turned into an all day activity. Who cared if I had a final the next day, I was writing code! Me! Writing code! It was the most incredible experience to see it compile and run in the emulator. Then I plugged in my phone and ran it. My iPhone 5 was running a program that I had written. I had made an app. A mother fuc*ing iOS application!

My million dollar hack. Even drew that UI myself: 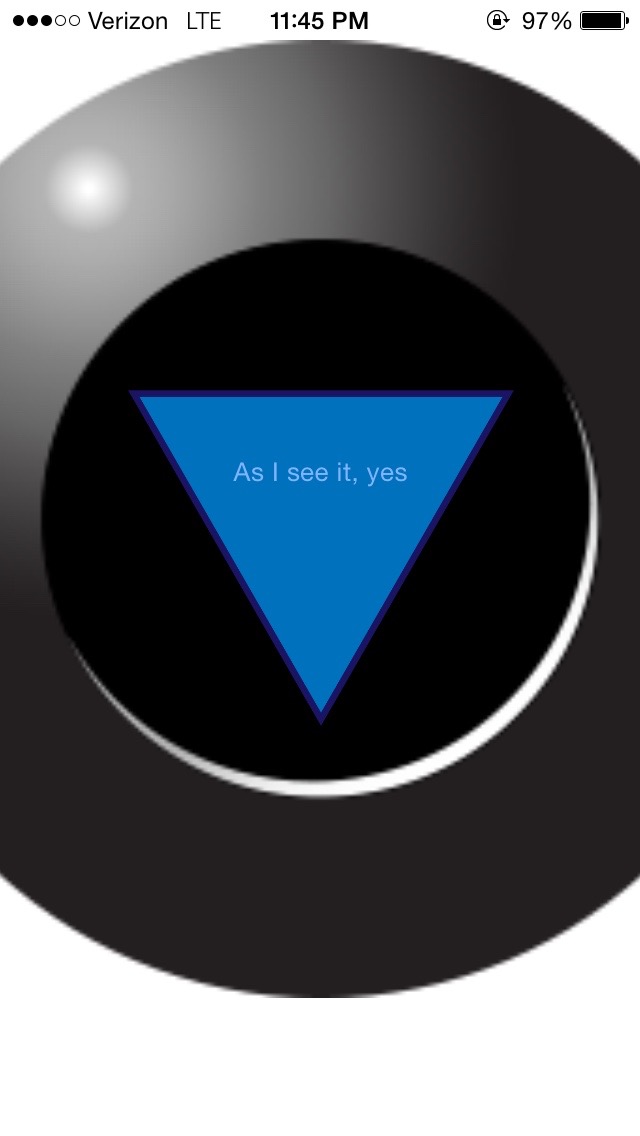 I was so excited I ran into the other room to show my roommate. He takes my phone, asks the Magic 8 Ball a question, shakes it, and then looks at me and goes “That’s all it does? Wow, you’re the next Zuckerberg.” and then just laughed at how excited I was. I grabbed my phone back and ran out the door, down the hall to a study room where I knew Albert was working, and slid my phone to him. He gave me the reaction I was looking for.

The next night I saw Dan at an Innoblue meeting and couldn’t wait to show him. After I showed him I asked him how to share it with my parents. I had sent my parents a video of the emulator on my computer, but I wanted to send them the app itself. I knew Dan could help me and I figured it would take 5 minutes. Nothing Apple does takes 5 minutes. Dan told me I needed a developer’s license and had to do all of this other stuff that I did not understand. So I figured I’d start with the license. I pulled out my computer during the meeting and went online to just sign up for one. Little did I know you don’t just sign up for a Apple developer’s license. Picture my face when I saw the $100 sticker price. Dan tried to convince me that it was worth it, but I just closed my laptop and told him I’d look at it later — I wasn’t planning on looking at it again.

What happened next ultimately changed the course of my life in ways I’ll never be able to imagine. A few minutes after closing my laptop I heard the cha-ching of Venmo. This is what I see on my phone:

I turned to Dan and all he says is “It’s worth it, you’re going to go on to build some cool sh*t”. I didn’t know what to say. At this point I had known Dan for maybe a month and he had just invested a good chunk of change in my future, expecting nothing in return. He saw the potential in me that I failed to see in myself.

“Remember there’s no such thing as a small act of kindness. Every act creates a ripple with no logical end.”
-Scott Adams

The next time you come across someone who needs help taking action on their dreams, is struggling on a hack, or even just taking out their trash, reach out to them. You’ll never understand how much it means to them, and neither of you will ever know the true magnitude of your kindness.

This sense of “paying it forward” is already deeply engrained in the hacker culture and, in my opinion, is its most attractive quality. For those of you who are interested in tech but don’t think you can do it, I’m telling you that you can. I was once where you are, and I still have a looooong way to go. But there is a whole community of people out there who want to see you succeed, and will do whatever they can to make sure that you do. Stop making excuses and dive right in with both feet, you may surprise yourself.